​Declaration of the Inception of IDC Herzliya (later Reichman University)

On the day, May 11th, 1994, (1st of Sivan, 5754), we, the members of the Herzliya City Council and the founders of IDC, witnessed by the State of Israel's justice and housing ministers, hereby lay the foundations for a new university in Herzliya.

A university which is based on the "principles of humanity," as stated by Theodor Herzl, who envisioned the foundation of the Jewish state and for whom Herzliya was named 70 years ago.

A university that fosters freedom of thought, research and personal fulfillment.

A university that strives for interdisciplinary training, nurtures scientific and professional excellence, and bestows on its students a broad cultural background and the vision of an international horizon.

A university that contributes to allaying hostilities in the Middle East by bringing together students of all faiths from across the region and the world, underscoring its goals of development and freedom of movement in the cradle of civilization through its teachings and research, and striving to fulfill the values of peace, freedom and dignity.

A university that is committed to the community in which it resides, and to its heritage, will be sensitive to social justice and help to enrich the pre-academic education system.

Today, IDC Herzliya launches its Business, Law, and Technology programs, as the first step towards its accreditation as a university.

We hereby confirm, with our signatures, the accord struck between the City of Herzliya and IDC Herzliya ahead of the academic school year, on this 70th anniversary of Herzliya's foundation.

We hereby declare the inauguration of IDC Herzliya, with the belief that this is the foundation of a house of study, research, cogitation, and education for residents of Israel,

the region and for young Diaspora Jews.

Prof. Uriel Reichman's letter on the 25th Anniversary of the announcement >> 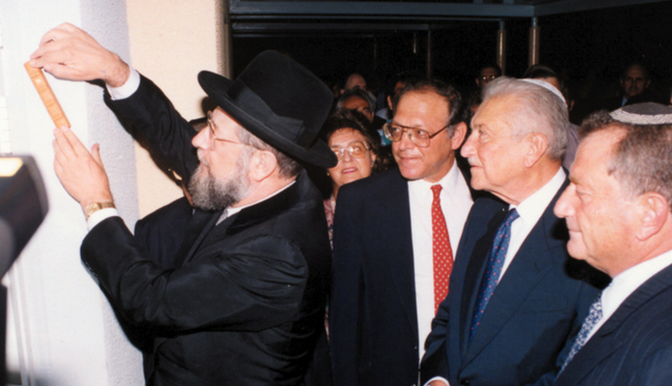