Memorandum of Understanding with Derasat Institute from Bahrain

The Abba Eban Institute for International Diplomacy at the IDC Herzliya signed Wednesday 11th August 2021, a memorandum of understanding for cooperation with the Derasat Institute - The Bahrain Center for Strategic, International and Energy Studies

The MoU was signed by by Amb. Ron Prosor, Chairman of the Abba Eban Institute, and Dr. Hamad Ebrahim Al Abdulla, Executive Director of the Derasat Institute. The ceremony was honored by Prof. Uriel Reichman, the President & Founder of IDC Herzliya, and Dr. Shiekh Abdulla bin Ahmed Al Khalifa, the Undersecretary for Political Affairs at the Bahrain Ministry of Foreign Affairs and the Deputy Secretary General of the Supreme Defense Council.

In recent months the Abba Eban Institute has established working relations with several organizations in the Gulf region to add content to the budding relations between Israel and like-minded countries in the Middle East. This process included one-on-one meetings and roundtables discussions between experts from the Abba Eban Institute and the IDC and their colleagues from the Gulf region and beyond. These meetings dealt with the core issues of regional security and multilateral relations between reginal actors in in view of the new strategic environment since the announcement of the Abraham Accords.

Prof. Uriel Reichman opened the event and said: “Every step forward that we take gives hope for the future of all of us, and that's why it's very special for us to welcome the delegation from Bahrain. I believe that we can take advantage of this beginning to launch a joint process, where we share knowledge, learn to understand one another and together lead a blessed change, in the spirit of the Abraham Accord”.

Amb. Ron Prosor: “The fact that your King took the risk and joined the Abraham Accords is a sign to all of us, that we need to pursue this budding relationship. We must nurture this tree so it will be able to sustain the winds and storms of our region, and truly blossom. We sign this MoU at a time when our shared security interests are taking center stage again. I heard what you said earlier this week about the Iranian threat, and it’s clear that we are on the same page. Your statements, and those made by your king, are a display of great courage and moral standing. Sadly, we don’t get to see that from other members of the international community, namely Europe. Just last week, the European Union, which claims to stand for justice, values, and the pursuit of peace, sent a high ranking official to the swearing in ceremony of Iran’s new President Raisi. I wonder what he was thinking, standing next to the leaders of Hezbollah, watching the “Hangman from Teheran” take over. Did he think he was promoting peace? Did he think he was helping to bring stability to the Middle East? Did he think that he’s helping to curb Iran’s aggression? This goes against morality, justice and common sense. Together, you and us, the brave forces in the region, we must convey to Europe and the United States that this aggression threatens future progress towards regional peace, security, and stability.”

Dr. Shiekh Abdulla bin Ahmed Al Khalifa, Undersecretary for Political Affairs at the Bahrain Ministry of Foreign Affairs: “I remember sitting on the south Lawn of the White House last September and realizing that history was in the making, when the Kingdon of Bahrain decided to join the Abraham Accords and establish diplomatic relations with Israel. Back then there was nothing between our countries. Today we’ve come a long way and we have a solid foundation. The values of peace, coexistence, religious tolerance, are values that Bahrain has been upholding for centuries both our peoples share. Linking our faculties, our researchers, our analysts, our students and having them work together will do a lot for the development of bilateral relations between Bahrain and Israel. As we are approaching the first anniversary of the Abraham accord, I can say that we have done a lot but there is much more to do”.

Dr. Hamad Ebrahim Al Abdulla, Executive Director of the Derasat Institute: “The signing of this MoU emphasizes the importance of cooperation between think tanks regionally and globally. Derasat and the Abba Eban Institute have been working together since the signing of the Abraham Accords on a number of activities that we will reinforce today through the signing of the memorandum of Understanding. We look forward to continuing working with you and thus reaping the fruit of the Abraham accord and utilize the expertise of both our institutions in order to better identify and understand the common challenges facing our region”. 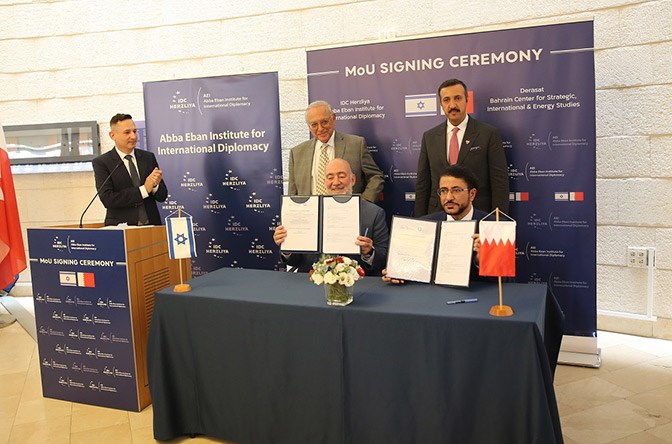